Steam Bathing: A Journey through the Ages continues with part 6, an exploration of the Roman Baths in England.

If you are new to this series, be sure to check out Steam Bathing: A Journey Through the Ages, which introduces the journey, Steam Bathing History With the Ancient Greeks and Romans, the Sweat Lodges and Temazcals of the Native Americans, Steam Bathing in the Onsen and Sento of Japan and The Turkish Hamam and the History of Steam Bathing.

Welcome to the Roman Baths in Bath, England

Jane Austen, sad to say, was not a fan of the city of Bath. Her heroines adopted her distaste, particularly in her last novel, Persuasion, where Anne Elliot dreads her stay in that Georgian resort. (Pictured above, Royal Crescent, Bath, England.)

Long before 18th Century society claimed Bath as its own reinvention, the Britons or Celtic People had already dedicated the hot springs at Bath to the goddess Sul or Sulis.

The legend of how Bath was founded begins with Bladud, the eldest son of King Lud, who contracted leprosy. He was exiled from court and became a pig farmer. One day, he noticed that his pigs, which had scurvy, were rolling in the hot mud created by a hot spring with abundant water. The pigs were cured, and Bladud became intrigued. He immersed himself in the hot mud, cured his leprosy and was able to return to court, in time becoming king. So he built a temple by the spring, founding the city of Bath.

The spring Bladud discovered is a remarkable phenomena – water at a temperature of 860 degrees Fahrenheit which has risen daily at the rate of 240,000 gallons for centuries.

It’s certainly understandable that the Celts attributed such a wonder to the gods. Their priests, or Dobunni, dedicated the site to the goddess Sulis, the keeper of the Underworld gateway, praying to her in a druid’s grove by the spring.

The Celts believed that deities and ancestors could be approached through major gateways such as the Bath hot spring. The Celtic Dobunni guarded this most sacred site with five hillforts which dominated the hot spring from their surroundings. Most distinguished are the Celtic forts at Lansdown and Solsbury Hill. 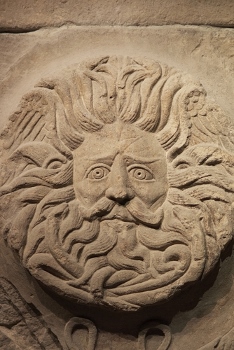 When the Romans conquered the Celts, they appropriated the sacred spring for their goddess, Minerva. But the name Sulis stuck, so the town became known as Aquae Sulis.

With their predisposition towards massive baths, it was natural for the Romans to create a major bathing complex in the town. The mineral-rich hot waters became a major tourist attraction for their healing properties (yes, even in 75 AD!), and visitors came from all over the Empire.

The Temple of Sulis Minerva is one of two classical temples that had survived from Roman times, the second being the temple of Claudius at Colchester. The temple was used for worship until late in the fourth century AD, when Christianity gained ground in pagan Britain. Emperor Theodosius ordered it closed in 391 AD, and it eventually collapsed.

The ornamental pediment survived and was re-erected in the Roman Baths Museum. It includes the Gorgon’s head, probably sculpted by craftsmen from Gaul, in the first century AD.

The pediment, supported originally by four fluted columns, featured marble allusions including Tritons, a dolphin’s head helmet, and a small owl. This collection of images have been discussed by scholars over the centuries, attributing them to the worship of deities such as Minerva or the British water god Oceanus.

The Roman bath is a pool lined with 45 thick sheets of lead, 1.6 meters deep. Bathers would climb down four steep steps on all sides.

The Romans, whose engineering prowess was noted in the second blog post in this series, drove oak piles into the mud to create a stable foundation.

At first, this was an open pool, but in the second century AD the pool was enclosed within a barrel-vaulted structure, including columns and statue bases in the pool itself. In the center of the pool was a fountain fed by spring water, as well as a large slab of stone, known as the diving stone.

During the 18th Century, public buildings well known to Jane Austen such as the Assembly Rooms and the Pump Room were added.

You can still drink the spring waters from the Pump Room, although all reports say that the hot mineral waters taste awful. Today coffee, lunch and tea are also offered there, often accompanied by music from the Pump Room Trio.

While you cannot bathe in the original waters, which have become contaminated by the lead pipes installed by the Romans, Bath offers the Thermae Bath Spa, where you can enjoy Britain's only natural thermal waters, just as the Celts and Romans did over 2,000 years ago. With its outdoor rooftop and indoor pools, aroma steam rooms, spa treatments and packages, and dozens of amenities, it becomes a royal experience in this most regal of spa resorts.

The next step in this series about the history of steam bathing takes us to Russia to explore the banya.