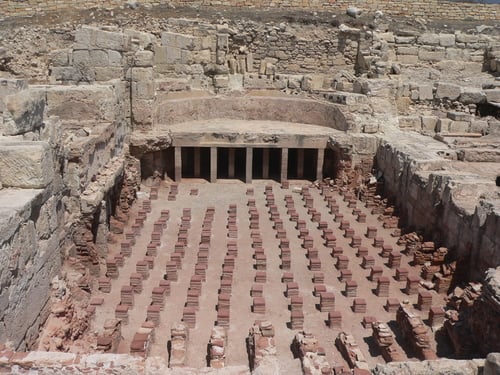 Steam Bathing History With the Ancient Greeks and Romans

Steam Bathing History With the Ancient Greeks and Romans 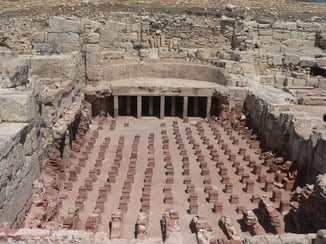 Steam bathing has been part of the human experience for centuries as we learned in Steam Bathing: A Journey Through the Ages. In this next chapter in steam bathing history, we explore how the Ancient Greeks and Romans embraced steam and influenced modern day spa treatments!

Did you know that many of the spa treatments you enjoy today are ones the ancient Greeks originated?

In The Book of the Bath, Françoise de Bonneville writes that in 6th century BC Greece, "Bathing was ritualized, becoming an art – of cleansing sands, hot water, hot air in dark vaulted "vapor baths," a cooling plunge, a rubdown with aromatic oils.” Our mud baths, aromatherapy, and steam are all ancient inventions!

The Greeks and Romans recognized that cleanliness was essential to health. Bathing, caring for the body and keeping it in optimal shape were all ways to pay tribute to the gods. Hippocrates recommended daily bathing and massage with fragrant oils.

Homer and other classical writers tell us of the wide variety of baths, from hot water tubs to hot-air baths, or laconica, a name that comes from the Laconica region, better known as Sparta. The Spartans developed primitive vapor baths, a forerunner of our steam showers. Hot-air baths were heated by coal-burning fires or by hot rock method, heating rocks outside the chamber. Bay laurel, fir, pine, or juniper branches were added for their curative essences, similar to today’s aromatherapy. The Greeks also used infusions or essential oils of these plants. Sweating was enhanced by massage with infused oils or by drinking a cup of hot herb peppermint or elder flower tea before entering the vapor bath.

Bathing became a way of life for the Greeks, an art form celebrated in beautiful buildings. Greek baths were built adjacent to the gymnasia, not only to cleanse the body, but as communal gathering places.

While the Greeks initiated many of the spa treatments we know today, the Roman competitive spirit made them vie to build the largest, most magnificent, and most expansive thermae – from the Greek word for hot – that the world has ever known.

By 300 CE, the Baths of Diocletian accommodated 3,000 to 6,000 bathers a day in a soaring granite structure covering 1.5 million square feet. Roman baths were beautifully decorated, with stunning marble mosaics, frescoes, and massive domes. 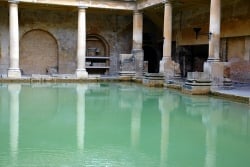 The Romans were known for their engineering prowess, and their expansive bathing facilities were no exception.

The Romans developed rituals for moving the bather into ever-increasing heat and back out again. Bathers started in the cold room (frigidarium), taking a dip in icy water, to the relaxing warm room (tepidarium). This stage supposedly eased muscles and joints, helping circulation, digestion and appetite. Warm waters opened the pores of the body, so when bathers entered the hot room (caldarium), they perspired in a series of sweat and immersion baths. Bathers would either return to the warm room for a massage with oils, their bodies scraped with a stirgil, a curved metal implement that removed oils and sweat, or take another cold plunge to close the pores, protecting the body from drafts.

While bathing was the main attraction, these enormous bathing complexes offered other entertainment. Romans would spend entire afternoons at the thermae, eating, socializing, attending performances, or exercising. Bathhouses became their primary social hub.  There were even sleeping quarters for those who wanted to take a nap. Entrance fees to these communal centers were kept low, so that virtually anyone could afford them. 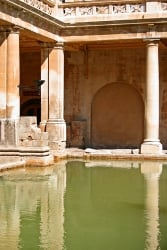 As the Roman Empire expanded, soldiers introduced bathing to newly conquered territories. Where they could, they took advantage of natural hot springs, in places such as Vichy in France, Bath in Britain, Wiesbaden in Germany, and Aquinicum in Hungary.

Pompeii has one of the best preserved thermae, with a sign announcing its opening still visible: "There will be a dedication of the baths and the public is promised a slaughter of wild beasts, athletics, awnings to shade the sun, and perfumed sprinklings." It would be hard for our modern spas to top that!

And speaking of modern spas, both Greece and Italy still offer the traveler the ability to luxuriate as in generations past.

In Greece, one noteworthy resort - The Anthia Hotel on the island of Tinos - provides not only a glorious retreat from the everyday, but also extensive spa facilities, including a Roman bath, while the seasonal Blue Sky Resort in Rhodes, includes steambathing.

And while in Rome, do as the Romans do, and visit the Rome Cavaleri, a Waldorf Astoria Hotel whose spa is “in the great tradition of Roman baths,” a 10-room expanse that, as in days of old, offers fitness alongside relaxation, in exquisitely appointed surroundings.

Visit Mr. Steam to see how to incorporate aromatherapy and steamtherapy in your daily routine!

What's Next on the Journey Through the Ages of Steam Bathing?

The next stop on our steam bathing through the ages journey will be to a place far distant from Rome: The temazcal of the Mayans and the sweat lodges of the Native Americans.