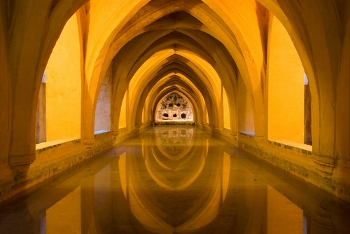 The Turkish Hamam and the History of Steam Bathing

The Turkish Hamam and the History of Steam Bathing

Steam Bathing: A Journey through the Ages continues with part 5, an exploration of the Hamam and Turkish baths.

If you are new to this series, be sure to check out Steam Bathing: A Journey Through the Ages, which introduces the journey, Steam Bathing History With the Ancient Greeks and Romans, the Sweat Lodges and Temazcals of the Native Americans, and steam bathing in the Onsen and Sento of Japan.

Welcome to the Hamam or Turkish Bath!

The air is still before the call to prayer. You step into the mysterious half-light of the hamam. The large dome above you, decorated with small windows, gives a sensation of spaciousness.

In the center of the room is a large marble stone, the gobek taşi (the navel stone or tummy glass), which glows invitingly. It ranges in temperature from warm to hot. That's where you lie down for a vigorous massage. In the next chamber, you can hear the dancing and music of a holiday celebration.

This is the world of the hamam (sometimes spelled hammam), or Turkish bath. The Turks borrowed much from Greek and Roman traditions, and made bathing culture wholly their own. Muhammad himself thought that those who visited the heat of the hamam – translated from the Arabic as “spreader of warmth” – might more easily conceive. Since a great tenet of Islam is the proliferation of the faithful, he advocated the spread of the baths.

The Hamam in History

There is a legend that when the Arabs took Alexandria in 641, they heated the Roman baths by burning the scrolls of the great Ptolemaic Library for seven months.

As the Turkish kingdoms expanded, they brought their hamam with them, building them either as annexes to mosques or as stand-alone buildings. The hamam became an integral part of Ottoman culture, and the great architect Mimar Sinan (1489-1588) was acclaimed as the renowned builder of baths in Constantinople and elsewhere. 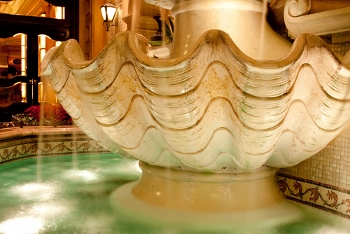 Before the hamam gained in popularity, the Turks had to combat a deep-seated Arab prejudice that sitting in pools of water was akin to bathing in filth.

Some of this was set aside by the use of natural hot springs, which were never still. But even more so was the religious significance of hygiene and purification. As noted above, many of the baths were built right next door to the mosques, and were used right before the faithful went in for prayer.

Bathers first relaxed, perspiring, in the warm room, heated by a flow of hot, dry air. They then moved to the hot room, heated by Roman-style hypocausts, to splash themselves with cold water, get a full body wash, and receive a massage. They retreated to a cooling room, where they could relax and socialize. Drinks and food were served at this point, including tea.

If a private chamber was available, it was even possible to catch a quick nap. “Your town is only a perfect town when there is a bath in it,” wrote Abu Sir, an Arab historian. 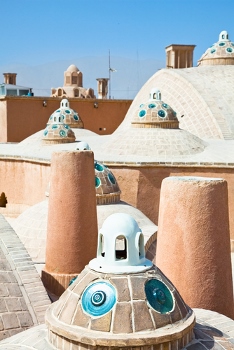 The Hammam and the Sexes

While the hammam at first only permitted men, women were eventually allowed to visit after an illness or having given birth. In time, the hammam became a critical social outlet for these generally isolated women – so much so, that if a husband denied his wife her visit to the hamam, it served as grounds for divorce.

Naturally, the baths are strictly segregated, either through separate baths or by adhering to separate schedules. Prospective mother-in-laws would use the hamam as a way to fully inspect their son’s brides, even going so far as kissing them to determine if they had bad breath.

The Hamam and Religions

As the Ottoman Empire spread, Christians and Jews were allowed to use the baths, but Islamic law prohibited them from doing so without some sign to distinguish them from the faithful. Christians were required to wear the cross and Jews a calf-head emblem in some baths, while in others they wore bells.

While this might shock modern-day readers, it was a common practice in medieval Europe, where both Jews and Moslems were required to wear distinctive badges. 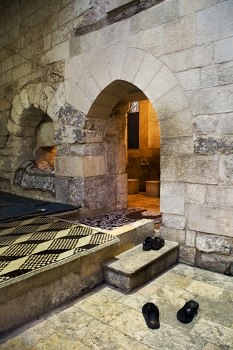 Hamman: Steam Bathing for All

One of the admirable qualities of the hammam was that they were open to everyone, with entrance prices kept low so all could afford them. In some towns, the fees were set according to a graduated scale.

They were open from early morning until late at night. During their few off-hours, they would be regularly inspected by the town police, to ensure that the facility was washed frequently and that water was maintained. Since many people bathed before the first call to prayer, the baths had to be open before dawn each day.

There was a charitable aspect to the hamam. Entrance fees were often donated to schools, mosques, or other good works. The town’s wealthy often sponsored the building of new baths. As Yusuf Abdalhadi, an Arab writer, said, “Whoever has committed many sins should build a bath as penance.”

The baths, dim and hot, were often compared to hell in religious tracts, and visitors were encouraged to think upon the fires of the deep to avoid sin.

Legend imbued many hammam with Ginns, spirits who could be repelled by quoting texts from the Koran. Some bathhouses had a fondness for their Ginns, particularly those who emerged to recite poetry to the patrons.

Other myths claimed that the devil and his friends would come to bathe in the period between the last two prayers of the day. Again, a quote from the Koran would generally send the devil running.

As in every other country where steam bathing became part of culture, the therapeutic qualities of the hammam were often noted. In fact, Moslems often called the hammam by the nickname “silent doctor.” As the site Archimedes Banya explains,

"The Healing powers of hammam were known for centuries. Famous Arab doctor and scientist, Avicenna (Ibn Sina) considered it to be one of the exceptional means of improving health and general well-being. Echoing the opinions of Greek doctors he believed that "physical exercises, healthy lifestyle and regular visits to hammam will render all medicine useless". In his famous work "The Canon of Medical Science" he pointed to beneficial effects of hammam on blood circulation, respiration, weight loss. He recommended hammam as a treatment for insomnia, paralysis, nervous disorders, digestive problems, low appetite, kidney and liver malfunctioning and much more."

While hammam persist to this day, there are fewer of them. However, if you happen to be in Istanbul, you might want to visit the extraordinary Ayasofya Hurrem Sultan Hamam, built by Mimar Sinan in 1555 (see Sultan Amir Ahmad Bathhouse on Wikipedia).

It was an operational hammam until 1910, when it became used as a prison and later as a carpet bazaar. A multi-million dollar restoration brought it back into use in recent years, and it is truly the apex of luxury, Turkish culture and steam bathing.

Be sure to visit Mr. Steam to see how you can incorporate these benefits in your home!

The next step in this series about the history of steam bathing takes us to Russia and England, as we explore the banya and the Roman baths in England.