The therapeutic effect of steam rooms is becoming a viable option for the potential care and management of this chronic skin condition. Here’s how psoriasis sufferers can use steam therapy.


Skin conditions don’t just threaten health; they can have a devastating effect on self-esteem, mental health, and general wellness. Those who suffer from psoriasis know this all too well.

About 7.5 million people in the U.S. have been diagnosed with psoriasis, and this chronic condition doesn’t discriminate. Recently, Kim Kardashian revealed that she has psoriasis, and model/actress Cara Delevigne, golfer Phil Michelson, and singer Cyndi Lauper also suffer from the disease. Rich, poor, male, female, young and old—psoriasis can afflict anyone.

According to the American Academy of Dermatology (AAD), approximately 80% of those with psoriasis have what’s called plaque psoriasis, which is characterized by lesions and red patches of flaky skin with slivery white scales. It’s both painful and unsightly. Many with psoriasis also suffer from joint pain and arthritis, and diabetes has also been associated with the condition.[1]

There is no cure for psoriasis, and treatment can be costly. The AAD reports that those afflicted pay anywhere between $51.7 billion and $63.2 billion annually to treat the disease.[2]

It’s not surprising that psoriasis can negatively affect a person’s emotion well-being. The ADD estimates that as many as 50% of those with psoriasis suffer from depression. And while it’s not contagious, it’s often mistaken for diseases that can spread, leaving psoriasis sufferers often feeling like outcasts. If you have psoriasis, or know somebody with the skin disease, none of this is news to you.

Experts aren’t sure of the exact cause of psoriasis, but they consider it a disease of the immune system, and it’s considered a hereditary condition. Psoriasis is associated with cardiovascular disease, and severe cases don’t respond well to current treatments. For mild-to-moderate cases, dermatologists have a range of options available to them, and often turn to topical emollients, nutrients (e.g., vitamin D), corticosteroids and other pharmaceutical agents to combat the condition. 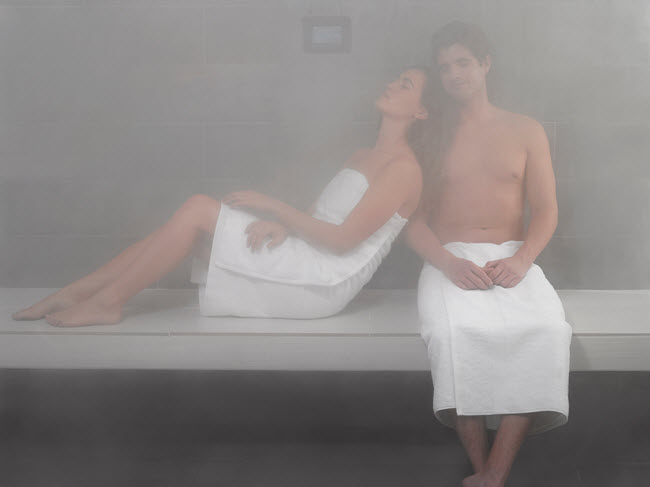 Multiple studies have confirmed the potential benefits of steam rooms on skin, and these possible therapeutic effects are likely to extend to psoriasis. While triggers vary between people, one study found that low-humidity, especially cold winter air, can thicken the top layer of skin, which can lead to an immune response that increases inflammation.[3] Another study asserted that low humidity is a risk factor for flare-ups of the disease, so the moist heat from a steam room may relieve symptoms and help prevent a breakout.[4]

Some psoriasis sufferers utilize facial steamers to help remove skin flakes and reduce redness, while opening up pores that will better absorb healing lotions and cleansers that are applied afterward. Steam may also help reduce itching and surface irritation of the skin. The amount of time needed to produce benefits may be as short as 5-7 minutes, so be aware of how long you spend in a steam room or with a steam product when dealing with psoriasis.[5] 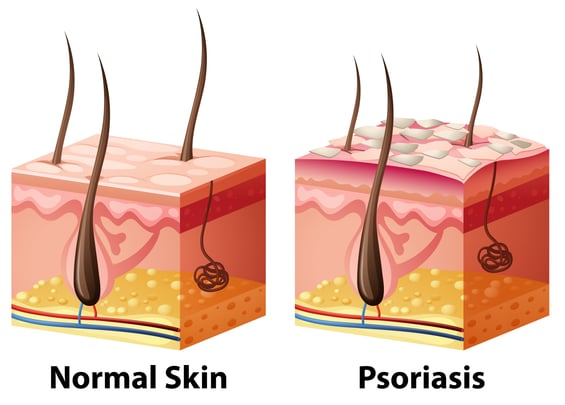 Those suffering from psoriasis often point to stress as a trigger for flare-ups. Steam rooms are known to help reduce stress and enhance feelings of well-being. Not only can a session in a stream room relax the body in a general sense, biological responses to heat hydrotherapy may exert a number of positive effects.[6]

This occurs through a spectrum of mechanisms. When a body is in stress, it releases hormones such as cortisol, which can damage cells in the body and weaken the immune system, reducing the effectiveness of white blood cells.

Stress also increases inflammation, which is a prime trigger for outbreaks of psoriasis. Less inflammation helps relieve discomfort from joint and connective tissue pain, a frequent complaint of psoriasis victims. In fact, research has found that steam therapy can help reduce overall pain from inflammation and other causes of discomfort.[8]

As well, the “epidural blood perfusion” of heat therapy helps increase circulation, which can help eliminate toxins. Flushing toxins from the bloodstream and the epidermis can strengthen the overall immune system to go after the underlying causes of psoriasis.[9]

A condition like psoriasis can be difficult to manage for a number of reasons. Dermatologists have palliative remedies, some quite effective, but an outright cure isn’t available and flare-ups can strike at any time. This is one reason why so many victims of this disease suffer from mental health issues.

Feeling good is more than skin deep, and this is where steam rooms may really help those struggling with psoriasis. Steam therapy has been shown to help release serotonin, the “feel-good” neurotransmitter that’s associated with depression. The less serotonin you have, the more depressed you’re likely to be. That’s why so many prescription medications for depression are SSRIs (selective serotonin reuptake inhibitors), which helps regulate this critical chemical in the brain. Steam rooms help raise levels of this important neurotransmitter naturally. [10]

As noted earlier, steam therapy from sessions in a steam room potentially exert a positive effect on many physiological systems—hormonal, respiratory, neurological, musculoskeletal—and this comprehensive wellness enhancement can only benefit those suffering from psoriasis.

With a cure elusive and the prime causes of psoriasis a mystery, victims of this disease can use another option in their day-to-day management of this serious condition. Spending time in a steam room may be a simple but effective way to help keep flare-ups and symptoms at bay.

Give a try and see what it can do for you.

[2] American Academy of Dermatology on Psoriasis

[4] Geoepidemiology and environmental factors of psoriasis and psoriatic arthritis.

[5] How to manage Psoriasis on Face and Forehead

[9] Arsenic, Cadmium, Lead, and Mercury in Sweat: A Systematic Review

[10] How to increase serotonin in the human brain without drugs