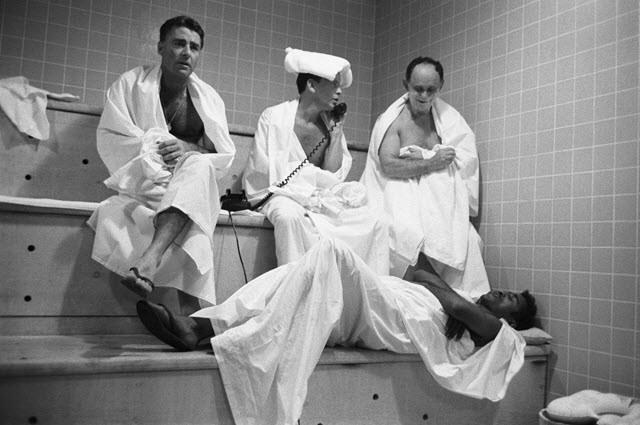 A look at some of the most famous lens-fogging steam room scenes in movies.

Steam has a way of curling languorously into a room, making itself at home, and softening faces and figures into mysterious forms, while encouraging sweat to bead on a perfectly formed brow or philtrum*. It’s positively cinematic. Which might be why there are so many memorable scenes throughout movie history set in steam rooms.

We don’t know what you do in your steam room, but in the movies, a lot of people seem to wrestle.

James Bond has sweated his way through multiple steamy encounters over the years, including a memorable tête-à-tête with a young Famke Janssen (playing Russian fighter pilot Xenia Sergeyevna Onatopp) who attacks Bond when the poor guy is simply trying to have a schvitz at the Grand Hotel Europe.

Much karate flipping and Soviet-style “crushing the enemy between your thighs” ensues, but despite numerous body-slams onto the tile floor, everyone comes out feeling limber and refreshed. Why?

Because steam rooms are an excellent treatment for injuries of all kinds, including espionage-related.

This scene from GOLDENEYE (1995) is by no means James Bond’s first bath house run-in. 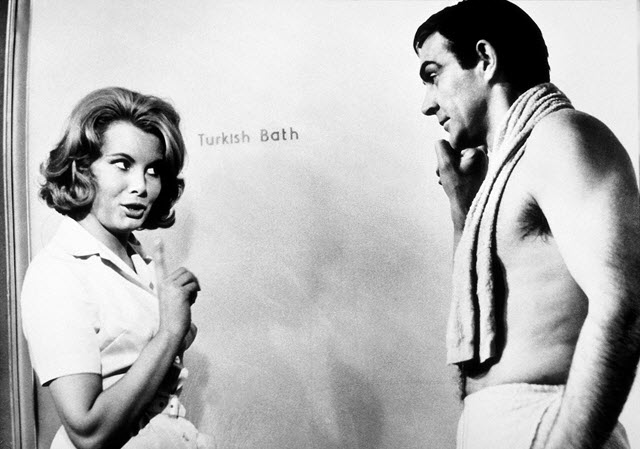 Fully 30 years earlier, in THUNDERBALL (1965) Sean Connery’s Bond is nearly killed by an out-of-control spinal traction machine at a traditional British spa, after which Bond entices his fetching physiotherapist into the steam room for a recuperative steam bath.

Later, Bond exacted revenge on the devious Baron Lippe, whom he traps in a sitz bath set to “hard boil.”

But despite all the practice he’s had, James Bond is not the reigning cinematic king of the steam bath tussle. That honor belongs to Viggo Mortensen in EASTERN PROMISES (2007), in which the esteemed actor is attacked by yet another Russian henchman, famously losing his towel mid-fight.

In an interview with The Telegraph at the time of the film’s release, Mortensen described the experience of filming the steam room scene:

“It was slippery, painful, embarrassing. I always knew the scene should be as realistic as the rest of the movie, so I couldn't feasibly keep the towel on. Plus, we shouldn't be trying to hide things or pretty it up in any way. I knew at times it would be awkward and vulnerable. It would also be painful because I couldn't wear any pads to protect me. All I was wearing was a bunch of tattoos.”

Let’s hope he had a chance to unwind with a nice steam-bath afterward, sans assailants.

The Steamy Art of Negotiation

Second to kung fu fighting, the most common activity on display in cinematic steam rooms is the fine art of negotiation. 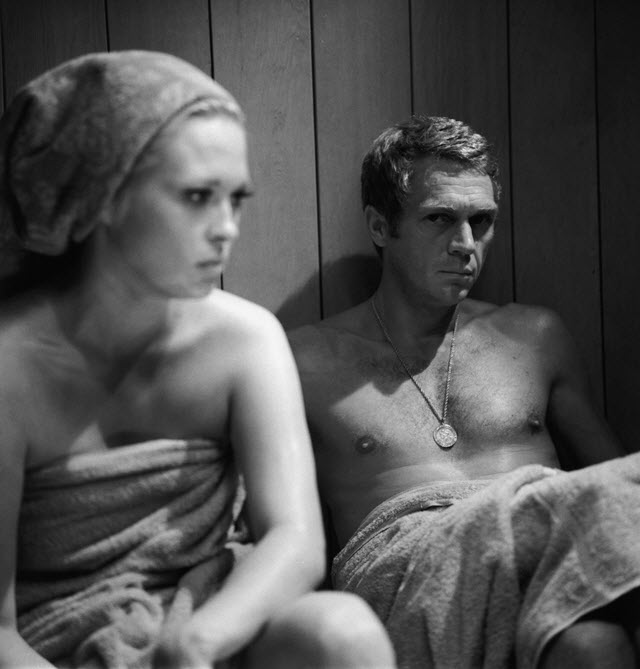 In the original version of THE THOMAS CROWN AFFAIR, a moody, red-lit steam room is the setting for Steve McQueen to face his imminent doom, as a dewy Faye Dunaway attempts to negotiate a way out for him. (She employs a swanky 1960s corded phone in a hideaway panel in the wall—the hippest steam-room accoutrement prior to the invention of integrated aromatherapy and chroma lighting.) The scene unfolds slowly, with ample time to soak up the sight of a shirtless McQueen and a towel-draped Dunaway, both characters sweating it out in more ways than one.

For a sprightlier steam room scene, look no further than the Blues Brothers, in the 1980 classic comedy, negotiating with booking agent Maury Sline to get them a gig so they can pay the property tax owed by the orphanage where they grew up. As the white towels and white steam curling around them imply, they’re on “a mission from God.”

The scene plays out quietly, just a simple conversation between three dudes in towels, (and fedoras and dark shades.) Maury is a king-maker and a can-do kind of guy, but he’s skeptical about the brothers’ ability to gather the crowd they need to save the orphanage.

In the scene’s best gag, after Jake and Elwood have convinced Maury to help them out, we cut wide: It turns out the brothers have brought their entire band to the meeting. All eight back-up musicians, in towels and dark glasses, rise as one and depart the steam room. (Fortunately, both Dan Ackroyd and John Belushi manage to hang onto their towels.) 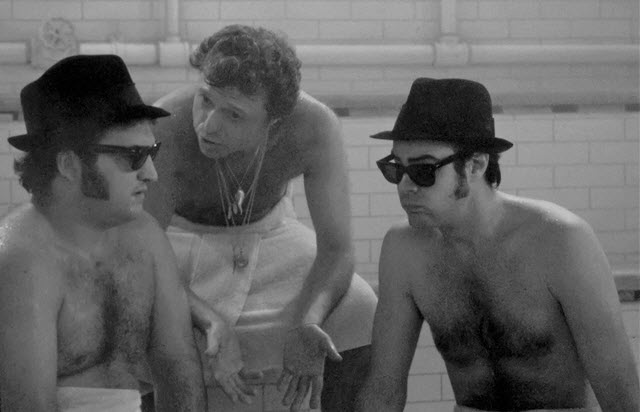 Jake and Elwood were trying, however indirectly, to save an orphanage. Aubrey Plaza is just after some backstage passes to Rihanna in MIKE AND DAVE NEED WEDDING DATES (2016).

She conducts a negotiation of her own in the steam room of a posh Hawaii resort, until she’s interrupted mid-transaction by Mike. This scene ends in a knock-down, drag-out brawl, too. Which is funny, because we’ve always found that steam rooms lower our pulse, fill us with happy thoughts, and make us less likely to attack our cousin.

But hey, it’s the movies.

The third activity you’re likely to spot in cinematic steam rooms is probably a bit more relatable to the real-life steam-bather: earnest conversation.

Oliver Stone’s ANY GIVEN SUNDAY (1999) features a quiet and surprisingly moving exchange between Jamie Foxx and Lawrence Taylor, the NFL Hall-of-Famer and two-time Superbowl champ who spent his career as linebacker for the New York Giants.

He does all the talking, while Foxx (despite possessing the room’s only Oscar award) just listens with a towel on his head. Maybe it’s the steam filling the room, offering some distance and cover, but L.T. gives a sensitive speech about what it means to live well on and off the field that has earned a place in the canon of great sports scenes—and steam room scenes, too.

“Steam rooms are very intimate, private places, where a character can be vulnerable and stripped down, both literally and figuratively … in a setting free of the outside world.”

That’s definitely part of the steam therapy experience, and a reason more and more people are installing steam showers in their own homes.

The other advantage of a personal steam room? Fewer attacks by Russian henchmen.