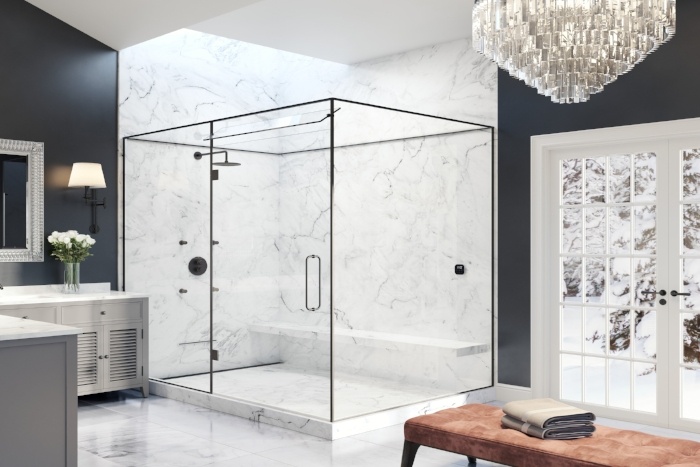 A Week in the Life of an At-Home Steamer

A Week in the Life of an At-Home Steamer

A week contains about 10,000 minutes, and what you do with them is up to you. An ever-growing society of steamers has discovered that spending 20 of those minutes each day enjoying a soothing, stress-lifting, health-promoting steam bath is an excellent investment of time. And for those who have installed a steam bath in their own homes, those 20 minutes quickly become an appointment with happiness that they rarely miss.

We asked some committed MrSteam users if they’d let us take a peek into their steam baths and their calendars, sharing how they incorporate steam therapy into their busy schedules. Hey, eyes up here!

Monday morning, 8:00 a.m.: After a rigorous workout, Dan Reinert of New Orleans relies on his MrSteam steam shower to help speed muscle recovery and reduce inflammation. “When I am home I steam every day,” says Reinert. “Envision that feeling you get when you just went to a great spa and have gone into the steam room and have that relaxed feeling. I get to start every day with that in my own home.”

Tuesday, 9:30 p.m.: After a busy day at work, Timothy “T.J.” Mullally taps his name on the touchscreen of his iSteam3 controller. Each member of his family has a personal setting, designed to heat the steam shower to a preferred temperature and duration. T.J. and his wife, Heather, decided to get a MrSteam Steam Shower system in their home six years ago. “We understood the wellness and relaxation benefits and found that this one simple upgrade to our home pretty much outweighed any possible other upgrades we could add,” says Mullally. “I have insomnia pretty bad, to the point where I sometimes only sleep three hours.” Using a steam shower is ideal for someone like T.J., as it can increase the length of REM cycles during sleep.

Wednesday, 6:30 a.m.: Martha Orellana, who identifies decisively as NOT a morning person, is able to face (and sometimes even embrace) the dawn—with a serious assist from her in-home steam shower. “I start my day by heading into the steam, which wakes me up, and then follow up with a cold shower. It’s part of my daily routine.” Using her iSteam3 Steam Shower Control, the Los Angeles-based Orellana follows up her steam session by listening to music or the news in the bathroom while she gets ready for work. She has another secret, too, for stepping into the morning light looking ready to conquer the day: That same steam shower is great for de-wrinkling clothes. “Silk, cotton or nylon, I can pop a garment in for a minute or so and all the creases are gone.”

Thursday, 7 a.m.: T.J. Mullally shaves in his steam shower, using a fogless mirror he’s installed. “After six years in the military and shaving out in the field, being able to relax and shave in the steam is such a luxury,” says this veteran of the U.S. Army. On the weekends, he’ll heat up and chill out in his steam shower with an audiobook, which he plays through his Bluetooth-enabled MusicTherapy system.

Friday, 11 a.m.: Dan Reinert’s wife, Mai, steams every other day, usually mid-morning when she’s ready for a break. “For Mai, she swears by the health and beauty aspects. She goes in for 10 to 15 minutes and gets the toxins out, opens up the pores,” explains Reinert. On the health side, “Where we live, the pollen counts are high in the spring and fall,” he says. “For Mai, using the steam shower has really cut down on the amount of seasonal allergy medications she needed to take.” His own view is that our modern lifestyle has made us more susceptible to allergens in the environment: “In this day and age, people don’t sweat enough. You’re in an air-conditioned house, then you get into an air-conditioned car, and go into an air-conditioned office. You never really work up a sweat, but your body is designed to sweat as a purge to get rid of what it doesn’t need. It’s good to sweat.”

Saturday, 3 p.m.: 12-year-old Dustin Mullally, T.J.’s son, drops off his soccer gear and goes straight for the family’s steam shower. As a competitive player, he uses steam therapy for exercise recovery after five or six hours of training. “My son started steaming at 6-years-old,” says T.J., “And he understands the benefits.” Those benefits include not only enhanced muscle recovery after sports activities, but also immune response. “Dustin used to get a lot of ear infections, throat infections. We’ve found that those, plus the common colds and flu, have been greatly reduced for our family with having the steam shower. We just don’t get the stuff that other people around us are getting.”

Sunday 8:45 p.m.: Spa night! Martha Orellana and her wife turn on a little jazz and unwind with MrSteam. Chromatherapy, which immerses the steamer in a bath of color designed to soothe, center, or invigorate depending on your preference, provides an additional facet to their therapy. The couple likes to apply a Rhassoul Lava Clay mask and bliss out in a steamy bath of celestial blue. After the mask sets, the steam gently dissolves it, “Then you have brand-new feeling skin,” says Orellana. “It really pulls the toxins out. Before I had acne and now it’s all cleared. My skin is so much better now than it was before I started steaming.”

Morning, midday, or evening. Before work or after a workout. Alone or with a partner. There are endless ways to make steam part of your weekly routine, but they all have one thing in common: They reclaim a few of those 10,000 minutes for you. Your health, happiness, and wellbeing. Steaming feels so good, you’ll probably wish there were eight days in a week.