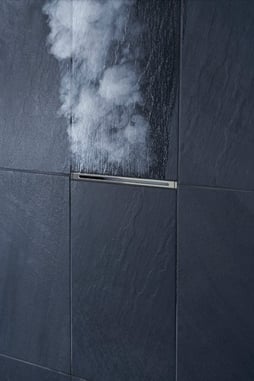 LONG ISLAND CITY, N.Y. (May 4, 2016) — In another steam shower industry first, MrSteam has introduced the Linear SteamHead, whose sleek and slender, horizontal profile delivers an even dispersion of steam smoothly and quietly, while remaining all but invisible to the user.

In sharp contrast to conventional square and rounded steamheads that protrude into the room and deliver steam from a single exit point, the discreet and unobtrusive Linear SteamHead is set flush to the wall and contained almost entirely within it.

“Today’s showers are busier than ever with multiple showerheads, body sprays and lights, plus caddies and shelves for multiple soaps and shampoos,” notes Michael Pinkus, MrSteam president. “But amid all this functionality, designers and their clients also desire a clean and uncluttered look, and this is exactly what the Linear SteamHead delivers, along with an exceptional steam shower experience.”

The minimalist aesthetics of the patent-pending Linear SteamHead echo those of other facets of the contemporary American shower, especially the grid lines of its tile, marble or granite surfaces, as well as the streamlined look of linear drains, whose popularity is on the rise.

Expressing the timeless philosophy of the Bauhaus school of design, its clean, narrow opening emits a thin, undulating ribbon of steam that flows upward in an even, gentle pace. This “reverse waterfall” naturally distributes steam throughout the room, providing both a focal point and a bit of theater for the steam bather.

Three times the slot area: The singular design of the Linear SteamHead also keys its state-of-the-art performance. Made of corrosion-resistant anodized aluminum, the new head offers a horizontal opening with three times the cross-sectional, or slot, area of a standard single-point SteamHead. Introducing steam along this broad flat opening facilitates its gentle, even distribution throughout the room, and at a much lower velocity, which means less noise.

In fact, the steam is already partially “pre-distributed” as it emerges from the Linear SteamHead. Its interior features an array of alternating and intersecting vanes that allow the incoming steam from the generator to expand, slow down and change direction — all located within the wall cavity, thereby muffling noise. What emerges on the other side of the wall is a rich fluffy cloud of steam, whose soft, white, billowy surfaces envelope the space, suspend essential oil fragrances, fill the lungs and warmly embrace the skin.

Contrast this to a conventional steamhead, whose overall size must be minimized to make it as unobtrusive as possible. Lacking the interior room to expand or change direction, the steam flow must wait until it exits the single point opening. The results: higher velocities, more noise and a far less smooth dispersion of steam.

The design of the Linear SteamHead also eliminates another potential problem with current steamheads: the pooling of condensate, which typically impedes steam flow — again triggering turbulence and noise. In any steam system, a portion of the steam will cool and condense into water that is released through the head. To manage this inevitability, the vanes inside the Linear SteamHead and the bottom of the head itself are specially sloped to route the condensate flow in a way that avoids pooling.

“The minimization of pooled water, combined with the reduced velocity caused by the vanes, permits a steam flow with very little turbulence or noise,” says Pinkus.

The Linear SteamHead offers several other key features and benefits that enhance its durability and facilitate its installation:

One-piece, aluminum extrusion process: Unlike conventional steamheads, which are typically forged from brass, machined and electroplated, the Linear SteamHead is a one-piece aluminum extrusion that avoids seams, connections and moving parts. The only joints are between the end caps and the extrusion, according to Pinkus.

In addition, the integral one-piece extrusion process enables MrSteam to employ a single die to create steamheads in a range of sizes for different-sized generators. “We now have much greater flexibility to match more precisely head length to generator size for a given application,” he says. “Bigger generators produce more steam, which, in turn, needs a proportionately larger slot area.”

Slotted end cap screw holes: During an installation’s rough-in phase, the installer may not know the exact thickness of the wall — cement board, thin set and a finished wall surface — that will eventually be applied to their framing. In response, MrSteam equipped the Linear SteamHead with slotted, rather than rounded, end cap screw holes. These elongated slots permit the SteamHead’s final position to be adjusted either toward or away from the wall before a last tightening of the screws. “This fine-tuning allows the Linear SteamHead outlet to be flush with the finished tile, marble or granite surface,” says Pinkus, “making for a much easier and aesthetically pleasing installation.”

Ready to build your steam experience?